Studies on WWII in NORMANDY 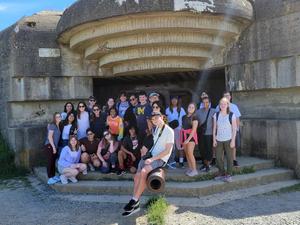 Senior Roxana Arellano received a full-tuition scholarship from a POLAHS donor to participate in Normandy Academy, a study abroad program that introduces high school students to WWII through travels to New Orleans and France.

Today was interesting! I met a lot of new people such as my roommate Annie, who’s really cool! After we got into our rooms we went down to the lobby and played card games with a couple other students until everyone arrived and we headed to the museum. Once we got there, Ms. LaToya told us more about the museum and we did icebreakers to get to know each other.


Then we watched Beyond the Boundaries, which was a 4D movie and it gave me goosebumps due to the effects making me feel as if I was a part of it. The movie talked about a couple of people who were involved in WWII, and it made me feel a bit emotional since it allowed me to form a connection with them. A letter from a soldier named George, who was writing to the person he loved, made me realize that the soldiers were real people who loved and existed.


After the movie, we ate dinner together and I got to know more about the other people on this trip, such as what they wanted in a profession and some of the classes they took! I’m a bit nervous for tomorrow since that’s when we start our research project,but I have faith that I can handle it! Now I’m gonna try to get some rest since I had to wake up early to catch my flight to New Orleans.

Today was a bit of mixed feelings because after we had breakfast, we entered the library and it was so large! I was really amazed and we started our research project, in which we picked a person who was buried in the Normandy cemetery and wrote down any information on them and/or their unit. I chose Manuel Arruda, and I discovered that he and his brother died on D-Day but on different beaches, which really depressed me because since they were separated, it meant that they had no idea what happened to the other….


After our time researching, we walked down to the Louisiana Memorial Pavilion and we talked to a veteran named Ralph Hopkins. Even though we had 2 hours to explore, we spent the majority of the time listening to his stories and they were very interesting and some were even funny!


We then had lunch and we went to the Vaults and saw some artifacts that were from the time of WWII such as an infant gas mask, a Japanese surgery kit, a box of rations, and a Nazi flag with the engraved signatures of a group of American soldiers! It was very impressive and I was proud when I answered a question correctly when I told them that that artifact was an infant gas mask!


We talked to 2 other veterans, one from the Vietnam War and the other, Mr. Wolf, who fought in WWII! It was great to have listened to the stories of not 1 but 2 WWII veterans as it gave us an idea on what it was like to have been there fighting.

So today was very cool and fun because we managed to finish looking through all of the exhibits in the museum. I loved seeing the planes!


Afterwards we ate lunch and had a zoom meeting with Dr. McQueeny and he told us more about D-Day, the people involved, and how they prepared for it with postcards! Then we were able to go to the Road to Tokyo and the Road to Berlin and it was very interesting to see all of the artifacts, I especially liked seeing the medical uniforms and the air pilot jackets!


We then had to meet up to talk about trip logistics and we went out to the French Quarter! It was so cool and it reminded me of Downtown LA and we went to Oceana Grill and I shared a seafood platter with Mika. We then walked some more and saw some haunted locations until we reached Café Du Monde and I bought some beignets for both me and Mika! They were sooo good! We then walked some more and waited for the Streetcar to take us back. I was so tired from all of the walking but it was worth it! I’m nervous for my trip to France tomorrow but at least I’m not flying alone! Hope tomorrow goes well!

We had our flight to Paris and once we arrived in Paris it was pretty chaotic. After a long drive we eventually arrived at Le Bayeux Hotel and not only the hotel but the entire town was beautiful!  Once we got dinner I was really tired so I fell asleep once we got back to the hotel.

Today we went to several cool places! We first went to Pegasus Bridge and the museum next to it! This is also where I learned that poppies are given towards the fallen soldiers during the world wars, which is why there were a lot of poppy wreaths near the WWII monuments! We later on went to a bunker where we got inside and even climbed up to the top! We also went to Juno and Gold beach and I got a lot of shells and rocks from each one! Afterward we went to Longues sur Mer and climbed on top of some of the guns, which was a bit scary since one of them was pretty high up.

Today was a bit of a rough day for me because after I burnt my tongue in breakfast, we went to a German cemetery, which drastically impacted my mood and made me feel very somber and sad because not only were there many with no names, but it also reminded me of my little brother, which made me feel a bit uncomfortable and even more sad….


Afterwards we went to a town and entered a church called Sainte-Mère-Église where a paratrooper’s parachute got caught on the spire of the church. Inside the church, we saw a special stained glass artwork that was made in remembrance of the efforts of the paratroopers which was really pretty to look at and in that same town we went to the Airborne Museum.

For lunch we went to La Fiere Bridge and had cold pasta. I may not have liked the lunch but the view was beautiful and one of the statues had a funny story where the statue is based on the soldiers’ barber!


Afterwards we went to Brecourt Manor and a French man told us about his family’s experience in Hedgerow and the amount of German soldiers that were waiting to attack. It was impressive to see this sight and I felt fortunate to have him talk to us since he doesn’t give talks to people!

We then went to Utah Beach museum and I explored the exhibits which were pretty cool and saw a huge plane in a warm room! Then me and Ella walked down to Utah Beach and picked up some shells from there as well! We eventually got back into the bud and arrived at Angoville au Plain Church where there was a bloody battle and soldiers got so injured that the pews were stained with blood!


Finally we got back to the hotel and me, Annie, David, and Jacob went to eat pizza together and met up with Mika, Mirr, Jackson, and Jay! I’m hoping that tomorrow will be better since we will be exploring Bayeux.

Today we first went to a Commonwealth cemetery and it was pretty different compared to the German cemetery because first of all I didn’t feel as melancholy and there seemed to be a lot more life there due to the flowers and the tombstones.


Once we left we were able to explore Bayeux so me and the others went to a couple of stores, bought some water, and went back to the hotel to freshen up. Jacob, David, and I went to a burger place where Riley and Mika joined us and later had macaroons! We then walked to the Cathedral and it was so beautiful inside! I paid to light two candles for my brother and grandparents, prayed for a while, and took a lot of pictures. Afterwards, we went to see the Bayeux tapestry and it was so cool and long! My legs had been sore so I wasn’t able to fully enjoy it as much as I would have normally but it was still really cool to see and listen to the story!


I’m a bit nervous for tomorrow since apparently we are gonna have dinner with Madame Colette so I think we have to have more than casual attire.

In the last museum, there was a Cold War exhibit but me and Mika had to speed through it as we were running out of time and eventually we saw Madame Colette! She gave Aisatu two books from her childhood and Colette seemed very fond of her and Maddie to the point that she had them side on both sides of her and translate for us since they were the only fluent French speakers in our group. As Colette told us about how she learned to drive at 13 and that she would pull pranks on the Germans by putting sugar into gas tanks and anti-nazi propaganda in the pockets of Nazi coats.

So today we went to Pointe du Hoc but it was very foggy! Some people called it spooky but I really liked it! We eventually neared Omaha beach and saw the ocean at high tide as we walked onto a pier, which managed to spook me a bit since I’m not a good swimmer… We then took group pictures based on us being minorities, then guys, then females. We also took photos in front of a couple monuments which was pretty cool!


Later on we took a hike upwards to see the “high ground” that Americans needed to take, and let me tell you I pity them since I didn’t have the best time going upwards, especially since we had to avoid the “natural landmines” of sheep and cows…. Afterwards, we were able to play on the beach and when we headed back to Bayeux, me and a couple others went out to get snacks! I can’t believe it’s almost time to head back home!

Today we went to the Normandy American Cemetery to present a rose and talk about the service member that we chose to research and the cemetery was truly very beautiful…. Unfortunately I wasn’t able to present my flower to the grave of Manuel E Arruda but I was able to place it near the area. Mr. R told us about how the most recently buried person in the cemetery was related to his best friend and his story was very interesting to hear. It was touching to hear the stories of several service members and honor them for their sacrifice and the presentations helped humanize them in my eyes.

Today is the day I came back to California! The flight from France to Salt Lake City was long but I was able to watch a couple of movies to distract myself! I just arrived and I can’t wait to see my parents again! I just hope that the jet lag doesn’t hit me too harshly but as much as I enjoyed the trip, I’m glad to be back home. :)