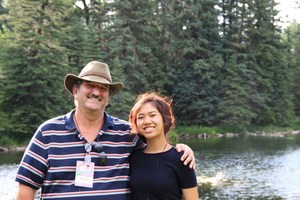 The Bezos Scholars Program at the Aspen Institute is a leadership development program which brings together 12 of the nation's top public high school juniors, 12 exceptional educators, and 6 scholars from the African Leadership Academy in South Africa.
In its 11th year, participants gathered for an all-expenses-paid week of exploration, dialogue, and debate at the Aspen Ideas Festival, June 27 – July 3. POLAHS student Gabrielle Paras, and her instructor Mr. Kevin Yourman, received the honor of attending Bezos this summer.
In Aspen, Bezos Scholars connect with visionaries from around the globe - international leaders, innovators, entrepreneurs, and artists across diverse disciplines. Presenters from previous years have included Twitter co-founders Biz Stone and Evan Williams, retired Supreme Court Justice Sandra Day O' Connor, musician Moby, and New York Times columnist David Brooks, among many others.
Following the Aspen Ideas Festival, the program continues as Scholars return home with the inspiration, relationships, and tools to create "Local Ideas Festivals" on an important and relevant issue in their own hometowns. Since 2005, Bezos Scholars have launched more than 170 Local Ideas Festivals across the U.S. and in South Africa to tackle a range of issues, from water scarcity to literacy, STEM education to rural poverty.
Reflection on my week as a Bezos Scholar: Gabrielle Paras
I applied to BEZOS because I wanted to bring about change in my community, though I didn’t know how. Later, in attending the BEZOS program and the Aspen Institute, I found purpose in my presence.
One of my favorite and possibly one of the most memorable lectures I heard included Youth Activist Clifton Kinnie. He was turning 19, lived in Ferguson, and spoke on the topic of police violence in America. Clifton Kinnie was a youth activist who wanted an end to state violence in his black community as they still faced prejudice, racism, and discrimination in the 21st century. The teen was a first-hand victim of police violence. Left horrified and tear-stricken from his talk, I vowed to be more grateful about the life I have, and to extend a hand to those less fortunate. Other speakers included Stanford Professor Jo Boaler, who spoke on the revolution of mathematics and its importance; Journalist Amanda Ripley on the power of storytelling; and Innovator William Kamkwamba, who spoke of his story in building a windmill that powered electrical appliances in his home, Malawi. With the diversity of the presentations I attended and the speakers I heard talk, I constantly found myself writing notes in my journal, and being so amazed at the knowledge and advice that many new faces gave to me.
Reflection on my week as a Bezos Scholar: Mr. Kevin Yourman
My favorite part of the entire week was getting to know incredible students from across America and Africa. I tried to have in-depth conversations with most of the students. I found them to have remarkable talents, determination, and ambition. I kept thinking of the incredible input they were receiving from the “fire hose.” To be so young and to absorb such diverse information from the most respected and knowledgeable people is something they will take and use in their lives.