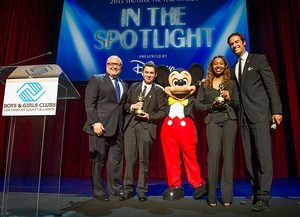 For more than fifty years, Disney and Boys & Girls Clubs of America have teamed up to help kids create the great futures they imagine.
On March 25, Boys & Girls Clubs Los Angeles County Alliance’s Youth of the Year ceremony at the El Capitan Theatre in Hollywood, California, celebrated that mission and the extraordinary achievements of Club youth. With Disney as the presenting sponsor of the 2015 Youth of the Year Competition—a Boys & Girls Club premiere leadership program that focuses on Club involvement, community and personal growth—two finalists were honored and named LA County Youths of the Year. Disney Senior Executive Vice President and Chief Financial Officer Jay Rasulo presented POLAHS student, Ronnie Oloimooja (Boys & Girls Club of the South Bay), and Brian Juarez (Watts/Willowbrook Boys & Girls Club) with their awards, and each will receive a $3,500 scholarship made possible by Disney and advance to the statewide competition later this month!
A few words with Ronnie…
“The Boys and Girls Club of Harbor City encouraged me to run for Youth of the Year. I had to write three essays and make a speech on each topic: What the Boys and Girls club means to me; my vision on American youth; and my personal brand. I've been active in the Club for seven years and I’ve also been involved in Keystone, Torch Club, and Smart Kids. I volunteer at the Club every summer and have been a mentor to the younger students.
I’m currently the President of Black Student Union and the Performing Arts club. I’m also ASB Commissioner of Spirit and Co-Captain of POLAHS Varsity Cheer. In my free time, I sing in my church choir and volunteer as an acolyte. I plan to go attend Tuskegee University as a Business Major this fall!
READ MORE