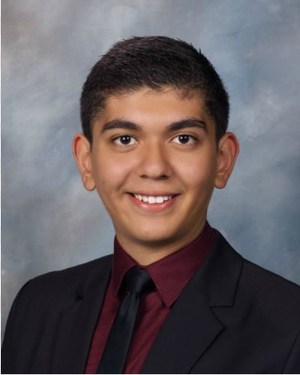 About QuestBridge | A non-profit organization that connects students with full-tuition scholarship opportunities at some of the nation’s best colleges and universities.
Over 75% of Quest scholars are among the first generation in their family to attend college, and over 70% are in the top 5% of their graduating class. The Quest scholarship covers all aspects of an academic career, including tuition; books and supplies; personal expenses; room and board; travel; and federal work-study.
Over 10,000 students apply annually. Roughly 300 are chosen. POLAHS senior Jorge Anaya received one of those prestigious scholarships. This fall he will join his sister Stephanie (POLAHS Questbridge Scholar ’13; Yale University ‘17) at Yale University, Class of 2019.
Jorge has a cumulative 4.4 GPA and is ranked number one in his class. He completed five Advanced Placement (AP) courses at POLAHS and passed all of the corresponding exams for college credit. Jorge has been honored as an AP Scholar with Distinction; a lifetime member of the California Scholarship Federation (CSF) and National Honors Society (NHS); and has received Science and Spanish department awards. In addition to serving as Editor of the school newspaper and Yearbook Editor-In-Chief, Jorge was selected for a competitive internship at Boeing last summer. He was one of the Bottle Free Club founders, a group who successfully petitioned the school Board to install hydration stations on campus. Perhaps most indicative of his hard-working and servicing nature, he has volunteered at Torrance Memorial Medical Center every weekend for four years.
While Jorge swayed between his passion for medicine and engineering throughout high school, he has decided to pursue his dream of becoming a doctor at Yale University. “My sister Stephanie is earning her premed degree in Psychology with Neuroscience. I’ll be studying premed with a degree in Biology. Stephanie loves Yale and has found time to attend football games and travel to New York on the weekends. Now we’ll be able to do some of those things together,” he says. Success hasn’t come easy for the pair. Raised in a low income family, Jorge describes his early school years as a time spent learning English and overcoming a speech impediment. “I didn’t give up in the face of challenges. Stephanie was serious about school and I saw how it paid off. I don’t compare myself to her, but see her as a role model and mentor.” POLAHS teachers describe Jorge as a humble and kind student and friend. He’ll certainly be a leader at Yale, too. Congratulations, Jorge!
“Perhaps the first thing that students notice about Yale is the caliber of their fellow students. There are extraordinary artists, student government leaders, star athletes, passionate activists, award-winning poets, prize-winning scientists, and people who are just simply "well-rounded." Because Yale students come from such a wide range of ethnic, religious, cultural, geographic and socioeconomic backgrounds, there is a remarkable exchange of ideas. Yale is a major research university that focuses primarily on undergraduate education and encourages students to become leaders of their generation in whatever they wish to pursue.” – www.yale.edu