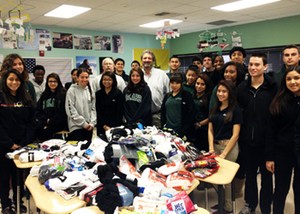 In partnership with San Pedro Packages for Patriots, the POLAHS Student Council began a school-wide campaign for necessity items to ship overseas to deployed members of our U.S. Armed Forces.
In a matter of weeks, POLAHS students collected nearly 700 pairs of socks, and hundreds of beef jerky and baby wipe packages. Their efforts were so successful that a second campaign will be launched on campus in April.
San Pedro Packages for Patriots is a non-profit organization led by Mike Walker, owner of San Pedro Automotive. Mike’s charity has shipped roughly SIX THOUSAND packages totaling over 70,000 pounds to Soldiers, Sailors, Marines Airmen, and Coast Guardsmen. Each package costs $13.50 to ship, an expense that Mike covers out of his own pocket or through cash donations. His generosity has been highlighted by numerous media outlets, including Fox News and the Daily Breeze. Please click here to help San Pedro Packages for Patriots and a cause important to POLAHS.