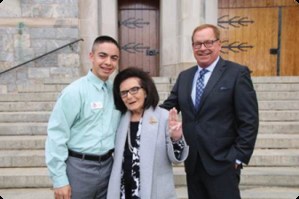 POLAHS honors the military in our community in a special way.
According to POLAHS’ charter document, children of military families receive priority enrollment and surpass the lottery for incoming students. Often, they enroll at POLAHS or transfer out to a new school mid-year.

Aaron Ferralles (POLAHS ’18) is on a mission to bring military-connected and civilian students together, easing the transition for students who may feel displaced. In the two short years that he’s attended POLAHS, Aaron became a founding member of the Student to Student (S2S) military program and the POLAHS Cadet Corps leadership program; attended a Military Child Education Coalition (MCEC) Student Summit in Washington, D.C.; and recently returned from the week-long Frances Hesselbein Student Leadership Program at West Point in New York – a distinct recognition as one of only 14 students selected nationwide. Perhaps most noteworthy is the fact that Aaron did not grow up in a military family. Rather, he’s a patriotic student leader with a desire for unity.
Aaron, tell us about S2S at POLAHS and the Student Summit in Washington, D.C.

S2S is currently in its first full year of operation. We’re a team that welcomes new students, creates a positive environment, and supports academic achievement. POLAHS has always had a great relationship with the military and we intend to continue that relationship for many years.

This past June, the Military Child Education Coalition (MCEC) selected prominent S2S teams across the United States and internationally to attend the first annual Student Summit in Washington, D.C. Our team received an invitation, and we proudly attended with Mrs. Costa and Ms. Armstead. The goal was to learn ways to promote college, career, and life readiness skills for all students. Major General Simenon Trombitas, 82nd Airborne Regiment of the U.S. Army, inspired me to not only focus on a military career, but also on humanitarian efforts through his stories about the Haiti earthquake. As a team, it’s crucial for S2S to spread empathy on our campus, in our community, and throughout the world.
Why was it important to start a Cadet Corps at POLAHS?

The POLAHS Cadet Corps is a leadership program we established while the school waits for authorization and funding for a formal Junior Reserve Officer Training Corps (JROTC). The program includes leadership training and education in basic military topics, supervised by excellent staff aboard the Battleship USS Iowa. We also receive insight from Navy and Marine Corps veterans. The Cadet Corps is not a military recruitment program, but it develops citizens who will one day improve our community. We currently have eighteen young men and women participating.

What is the Frances Hesselbein Student Leadership Program?

The program was named for Mrs. Frances Hesselbein, in recognition of her dedication to the development of children and youth. Mrs. Hesselbein is the Chairman of the Board of Governors of the Leader to Leader Institute and the former CEO of the Girl Scouts of the USA. She was awarded the Presidential Medal of Freedom, the United States' highest civilian honor, in 1998. Students nationwide applied to attend the one-week training program offered at the United States Military Academy at West Point, New York. For the 14 students selected, our travel and tuition was fully covered.
A few of the program objectives are team building, character and leadership development, and community involvement. How were these ideas addressed?

Every student was a natural born leader in one way or another, so we all learned from each other. Our activities could not have been completed as individuals. Each exercise or challenge required a leader and the group's support.

Some notable speakers from the Frances Hesselbein Leadership program included Frances Hesselbein herself, General Lloyd J. Austin (U.S. Army, Retired), Colonel Diane Ryan, and all of the West Point staff. Each speaker shared important ideas, life lessons, and philosophies about leadership and teamwork.
Was this your first time in New York?

This summer I visited New York City and passed by West Point on my way up to Cooperstown. At the time, I did not imagine I would be back in New York just a few months later to embark on one of the most profound experiences of my life. I have never been on a college campus or military installation as beautiful as West Point. The work that these students put in to be accepted to the Academy is inspiring.

Will you keep in touch with friends you made through the program?

I look forward to serving next to some of these civic-minded students in the military. They are more than friends for life, they are all family.
How did your passion for military service begin?

From the age of 12, I knew that I wanted to serve our nation in some capacity. Originally, I wanted to join the U.S. Army, but I had a change of heart when I visited the Iwo Jima Memorial in Arlington, Virginia. The memorial is dedicated to the United States Marine Corps. It states, “Uncommon valor was a common virtue.” Those words resonate with me to this day. I would like to be a Drill Instructor so I may possibly change someone’s life in a positive way. It’s also important to me to pursue a college degree. I feel confident that POLAHS is teaching me the skills necessary to achieve both goals.
You were recently awarded a competitive scholarship for the Jubilee Sailing Trust program. Congratulations! Next summer you’ll sail around New Zealand for nearly two weeks. How will you use the skills from S2S and the Hesselbein Leadership Program when you’re abroad?

I have extensive sailing experience that will assist me in my voyage. I think that’s one aspect of leadership – growing from and using your experience in new situations. I’ll be working with people from completely different backgrounds, just as I did at West Point. Some of my shipmates will have physical disabilities, and bringing individuals together is the mission of the Jubilee Sailing Trust. I hope that my shipmates will view me as someone of integrity and humility so that we may successfully complete our voyage. It’s going to be a life-changing trip, and I’m so thankful to my POLAHS donor!