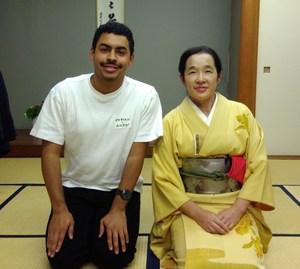 Gustavo A. Martinez (POLAHS ’15) is a student at CSU Los Angeles, majoring in Japanese with a minor in Art.
He’s currently studying abroad at Tsukuba University in Japan! Gustavo has wanted to study in Japan since his freshmen year of high school. His goal is to work for an animation studio after college graduation, or, pursue a post-graduate degree in Animation at Kyoto Seika University in Japan. Gustavo says that while he’s increasing his fluency in Japanese, he’s learned that he can handle pressure better than he originally thought. The most interesting thing he’s learned while studying abroad? The Japanese are extremely cleanly. There are very few trash cans or recycling containers in public, yet there is never any trash on the floor!