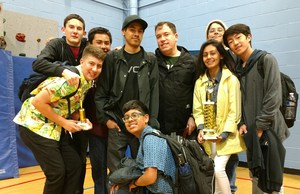 During the weekend of March 9 and 10, POLAHS Debate competed in the Los Angeles Metropolitan Debate League tournament held at Cal State University, Los Angeles.
The teams of Angela Rodas/Ryan Lee and Michael Ibarra/Hunter Clemons captured 2nd and 3rd place respectively out of over 50 teams. Both teams went undefeated for this tournament ending their weekend with 4-0 records against teams from other schools. Other POLAHS teams that competed scored impressive wins and were complimented for their analysis and communication.
Great job, POLAHS Debate!