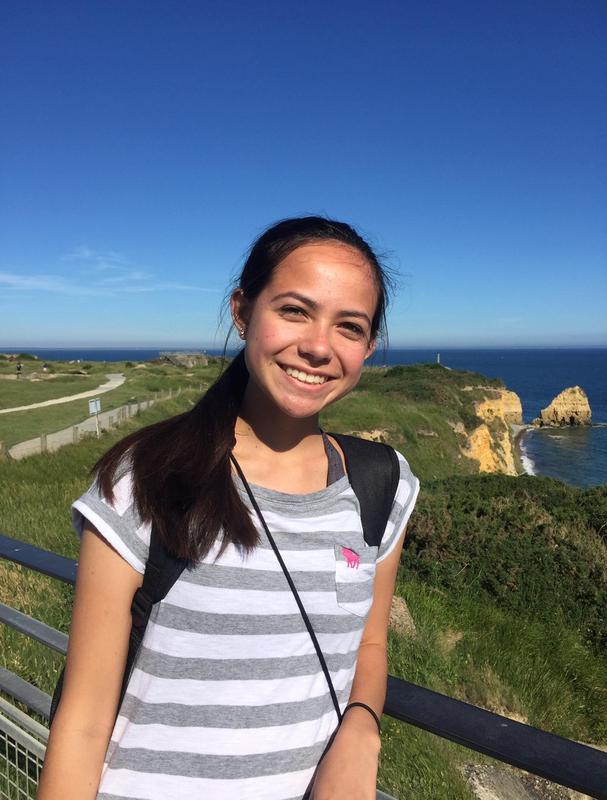 The trip first started in New Orleans and the city was so beautiful. One of the days we took a walking tour of the French Quarter and the architecture and history of the city was very interesting. In New Orleans, we toured the several exhibits at The National WWII Museum. We went into their "behind-the-scenes" vault, where we all took turns holding several types of weapons that were used in the war. Many of them were heavier than they looked. Also, we met a Veteran that volunteers at the Museum who told us his stories when he was deployed in France on D-Day, and we looked through school yearbooks that were made during wartime. On our last evening in New Orleans, we took a walking tour of the French Quarter before having dinner at a local cafe. What I enjoyed the most about New Orleans was the culture and influences the city had. The architecture from French influences was so beautiful to see, and it was so cool to view the jazz music and street parade in the area. France is such a beautiful country. I had never travelled out of the U.S. prior to this trip, and I am so thankful my first time was amazing. It was unreal to be in Paris and see the Eiffel Tower and Arc de Triomphe, as well as all of the sites and museums we went to in Normandy. Staying in Bayeux and personally walking on the grounds where the battles took place helped open my eyes on the depth and significance the war had on France. Almost 75 years after the Allied invasion in Normandy, the French people were so kind towards myself and the group attending the Academy, and it was breathtaking to see the gratitude they had towards us and how grateful they were for Americans to liberate their country from the Germans many years ago.
The city where we stayed in Normandy, called Bayeux, was beautiful. One of the days we took a walking tour of the city and visited the Bayeux Tapestry, the cathedral, the Memorial Museum of the Battle of Normandy, and the Bayeux War Cemetery. It was so nice to see all of the history that was preserved in Bayeux, as well as its stunning architecture.

It was unreal to visit the places where the battles and events took place during World War II so many years ago. I went to Sainte Mere Eglise, a town that was recaptured by paratroopers during D-Day. There, we visited the church in the town, as well as the Airborne Museum and La Fiere Bridge, where the 82nd Airborne Division captured the bridge along the Mederet River to hold back German counterattacks as the Allied forces came from the coasts. In addition, we visited both Utah and Omaha Beaches, where the American troops came into Normandy and began their difficult journeys into the invasion. We also visited several places that the Germans took over during their occupation in France, such as the Chateau of Madame Marie-Louise Osmont (who was allowed to have only one of 12 rooms in her chateau!), as well as the Chateau de Bernaville, which served as the headquarters of German 91st Luftlande Division.
FAVORITE MOMENTS
Out of all the things I experienced on the trip, I have to say that I have three favorite moments that I will always remember.
FIRST
The first was when we visited the batteries at Longues-Sur-Mer. Along the coast, the Germans built batteries on what was known as the "Atlantic Wall," and they were used as watch points to observe and stop any potential threats coming into France. The batteries at Longues-Sur-Mer were one of the only ones on the Atlantic Wall where the guns are still in place. While being there, I found it crazy to believe how beautiful the area was, despite the gruesome war that once took place at the same spot years before. SECOND
My second favorite moment was when we met Colette at the museum in Caen. Colette was a French Resistance fighter in the war, and she is 90 years old. In a family of French Resistance Fighters, her task as a young teen was to write down the license plates of German vehicles and misguide them, and she also made wreaths for the graves of fallen soldiers, which was a crime punishable by death. She volunteered as a nurse at the age of 16, around the time when D-day and the invasion of Normandy occurred. Though experiencing so much in her life, she was so kind and lively. During our interview, we asked what the symbols and pins on her jacket represented. In response, she was so proud to stand up and have Pierre, her translator, hold the jacket as she explained each symbol of honor in depth for us. After meeting her, she told all of us to do our best to succeed in life and to not waste our time on things that will distract us from our goals. THIRD
The third moment that I will always remember is when we visited the American Cemetery. It was the last place we visited before we travelled on the 4 hour bus ride back to Paris, where we stayed the night before we all went home. I have never been to a cemetery so massive in size. There were so many graves that stretched across what seemed like never-ending rows, as well as the walls that stretched out with thousands of names of soldiers that were never found. They gave us each a white rose that we could put on a tombstone of our choice. I placed mine on the tombstone of Edward S. Verdugo. He was a Private First Class from California, a member of the 116th Infantry Division, and he was killed on D-Day. Near the end of our time walking around the Cemetery, I will always remember when the bells started playing our National Anthem. I will never forget the tears I felt while feeling proud of what our country accomplished, yet mournful because of the number of lives that were lost in the cost of our freedom. From this trip, I now have friends in Utah, Washington, Colorado, Illinois, Massachusetts, and Mississippi. On some evenings, my friends and I were able to walk around in New Orleans and Bayeux. We tried new foods and desserts, went shopping, and had time to ourselves to freely explore the marvelous cities before bed. One month since the trip began, I am still talking with many of my friends from the trip. I hope to cherish the bonds I created with them in NOLA and Normandy, and I hope I continue to be in touch with them.
I am eternally grateful to have travelled to New Orleans and France to learn things I most likely would not have learned anywhere else, and to use this trip to influence me in my life. A year ago, I would never have thought I would be able to travel internationally and embark on this life changing experience. I learned so many things that I am going to remember for the rest of my life, and I made so many memories with new friends from all across the U.S. The trip has not only taught me more about our nation's history, but it has shown me that the world needs one thing: peace. It has shown me that the world, as a whole, has to make sure that the past is not repeated, and we all need to move forward towards peace.
Sincerely,
Kendall Dimson, POLAHS

Learn more about Kendall:
Interests | I enjoy learning in all of my classes, but my favorite subjects are math and science. I volunteer at the local animal shelter, I play club soccer on a team called Beach FC, I play on the POLAHS Girls Varsity Soccer team, and I am a member of the POLAHS Red Cross Club and the Performing Arts Club. I have a 4.4 GPA.

POLAHS | The POLAHS History classes prepared me for this trip very well. After learning about World War II in both AP World History and AP U.S. History, it gave me a foundation of the topics we went more in-depth on throughout the Normandy Academy. My favorite part about attending POLAHS is the great learning atmosphere it holds for myself and my peers. POLAHS gives students opportunities to learn and grow, and the teachers and staff are so kind and helpful in making sure that we all succeed.

Advice for Normandy Applicants | I would recommend this amazing trip to future students. For the application, my advice would be to be yourself. On the application, teachers want to know why are you interested in the trip, why you think you should be chosen, and how you would benefit from attending the trip. Being honest shows how much you desire to go on this trip and how dedicated you are to learn and travel by yourself for almost two weeks. For preparing for the trip itself, my advice is to prep yourself with as much knowledge on WWII as you can. Take time to engage yourself in the provided readings from the Museum and be ready to participate in discussions. The trip is a whole new experience while also travelling alone, so I also advise to be prepared to be accepting of other people's ideas and opinions.
About Normandy Academy